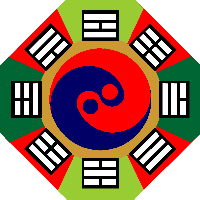 Paths to good Garden Feng Shui
Rebuttal to this article.
Disclaimer provided! Most importantly, never make fun of or take too lightly the ancient oriental arts, one of which is Feng Shui" - pronounced as fung schway. And  since I already have enough bad Feng Shui in my house, I better tread lightly here. Still I thought some Feng Shui advice could be re-directed to the garden and I have graded myself accordingly I will post a more personally dishonest article later on, but as I can barely see the cow in the lawn I thought the more honest approach would be a good beginning.

Site the gardens entrance so it doesn't face the back alley, an oncoming road, or utility pole. Corner houses are also a negative. -4

If the left side (or right)of your property is too too, plant trees to raise the height. I am fertilizing as we today.  +1.

Avoid the elemental conflicts such as placing water (in case my pond) next to fire (the barbecue pit I just built.) Always be doubly careful in the placement of propane barbecues!  -1

If you have to move, leave behind your old garden beds. Don't bring them with. Start your new garden (or Nursery) with new ones. -5  I have moved my Nursery three times.  The minus I gave myself might even be higher.

A pool of water like the fishpond is especially useful to conserve Chi +3  I really have been working on this! Sadly,. since that time the pol has died and the positive becomes a Neutral.

On ponds and even aquariums within the home, it is believed that if well provided for and well taken care of - fish die because they absorb the negative Chi. "This is the point of having the fish in the first place. So when a fish dies, be grateful to the fish and get another to replace it at once. I have to wonder 'What if the fish aren't floaters and you are unaware of their demise? Neutral

More on water! Water elements in the garden are important and good for positive Chi. Most believe that they should be in the 'front yard' preferably on the East or left side looking out from your front door. Putting a waterfall element in your backyard facing the house is also good symbolizing abundance flowing towards the home. Neutral  My pond is in the North of my house but does have a waterfall element. Having movement to your water elements is important. +1  I am constructing some more elements for a friend of mine who has incredibly good Feng Shui. Do my constructions elsewhere rub off on the gardener? Same for negative energies! Recent edit:  My waterfall died and the pond has dried up! The +1 is now a -2


Distractions such as barbecues or garden hammocks should be discretely screen from view. -1

Be careful not to plant a large tree immediately opposite the front door. This is considering poor position as it deflects the entrance of wealth. (So thats what happened!  I argued that 12 ft. away at the S.E. corner of the house didn't count. Nope, since then it has matured and is now mating with the house. I did cut the Eucalyptus in front of the house down, but it keeps trying to come back. A minus 1 or even -2

Place Mood balls and other reflective devices sparingly and never at the end of the garden bed or where hay can sneak up on you. +2

"Clutter and Debris;" get rid of the old and make room for the new. 'Less is more!' Oh, my God, I am so forever doomed, both in the home and in the garden. Makes sense however. Today I am getting the propane torch refueled. -5

Arrange your garden furniture so there is a hedge, fence or secure backdrop behind you. This is especially true if you are a nudist. +1

Avoid making gates, entrances or exits directly in line with each other. The invite coming into your garden should not be one to invite the visitor to immediately leave.  Neutral or -1

Recently I decided to add another. Sadly it is a negative. Never buy a property across from a Raptor Center that deals with broken or injured birds.
Nightly I have to listen to the heartbreaking sounds of eagles chirping  to their captive mates. I assume this might apply to Rest homes, Cemeteries, Crematoriums and like. Too many ghosts or unhappy souls.  -3.

It is good practice in the garden, (for air circulation alone,) not have one thing lie on another thing. That's really important. And if you look at it, just from that point of view you will realize it is for aesthetics as well. It isn't good for a plant wanting to rise up, to be stomped on by something coming down on it. So the branches have to go -- that is the tree pruner in me. +1

A dear friend, now departed explained another truth. 'The one thing I have learned about working in gardens is that you don't carry over. You don't get so smart that you outsmart yourself, by carrying over something that was successful. Because then, you're not really looking at where you are, and that is a new involvement. That is what growing older means and going through life is to have various stages. Each one builds up on the  other, and not lament that you don't have that which looked so beautiful, and "Oh, I wish I still had it." You enjoyed it! It's really important!" Bita  At that time I gave myself a minus 2, but after become disabled and loosing my Nursery plants and bonsai collection I understand. +2

I think I only scored a total of about minus -10 (a -5 is a high negative.) That is in the garden - not the house or the barn! -7 there at least.
My friend 'Dumpster' once commented: "Where one wipes one's shoes when you leave."

Anyone more conversant with this practice hop write in here. If you have  Feng Shui suggestions for the garden, please let me know!

If you have advice for some impoverished over yanged metal person born 11/30/50 do ever so quickly contact me!

There are many paths that can be taken to better connect and deal with our environment in more wholesome ways; the time is now! As gardeners we too abuse the environment, in our poisons and chemicals often overused in the garden. We can no longer continue this abuse. Feng Shui is popular not as a fad but rather as a universal truth and many are finding simpler more intuitive alternatives in the way we live and in the way we express ourselves to others. We are approaching a new millennium, and Feng Shui may help us to learn to love and embrace a clean and sustaining environment as part of ourselves.

After posting this I got some interesting feedback. Part of it was:

"...Doesn't matter what the compass is pointing to or  what happening up in space, if you build/arrange your house on a fault line or
in the valley of an active volcano, you're asking for trouble. Tectonic  activity, magnetic field of this plant (now becoming unstable),
meteorites just don't recognize Feng Shui."   by Patty       She adds more.

This got me to thinking on this some more. I thank her very much. I will now have to update the other article as well.

The modern and insulated American society does not appreciate how important terrain is to someone who has to understand and adapt to it in order to live with it. Our forefathers be they farmer or rancher in the Midwest or Wyoming certainly did. Planting protective trees and placing your home or barn doors in relationship to prevailing winds or blizzards meant life or death for oneself and the animals. The survival of the latter – the survival of the family.

It was not that one fights nature, but living with it. Making accommodations - because you understood nature would not.

Does Feng Shui  make sense? Partly. But some of those 'rules' were meant to reflect the everyday travails  the peasant in China faced and was later exaggerated by necromancers and the P.T. Barnums of that day, who took it to new levels. The orientations suggested would never apply to Australia as weather challenges would come from another directions entirely.

I realize I needed to make some edits on that article. Origin began in India and coming to China by the Buddhists.  The name comes from  paying more attention to the wind and water! Two things that the farmer had to deal and adapt to. I doubt they had any interest in the 'placement of
objects and foo foo as their possessions where to few to begin with.

As for augmenting the divine force of 'Chi,' this would naturally occur where two natural features meet, as earth meets water. The farmer whose land possessed a pond or natural stream was fortunate enough. That is plain bloody sense. As for that being translated into 'flow' of paths or planter beds that was simply a reflection of planting on sloped terraces or being leery of straight flowing streams that could erode your farm. Such 'Chi' floods remind us that sometimes it can move too fast for us.

Feng Shui placements of windows affecting depression. You betcha. A positive placement of windows – giving you an 'open' view and connection between your dwelling "earth" and the "heavens" makes sense. Especially when you considered that some of these people lived in yurts or as our pioneers did in overturned covered wagons, covered with sod to keep the wind and cold out. Windows were a luxury and if finally obtained were carefully and frugally placed.

All of this is based on practicality and I should suggest it should be renamed to reflect 'wind and water' with 'earth' as well. Most Native American tribes
understood this amalgamation very well and sited their dwellings and villages accordingly. It did not need a traveling Buddhist to teach them that.

As for your comment: "Tectonic activity, magnetic field of this plant (now becoming unstable), meteorites just don't recognize Feng Shui." I totally
agree. Vulcanism, glaciers and changes to the climate are things we really cannot do much about.

That said, we certainly are not as observant of nature as our ancestors were and when a financial or tectonic event occures, this gadget dependent "New Generation" might have a rude awakening. I am not even sure if being hooked up to your Cable, Kindles and IPods is such a benifit after all. The potential for becoming an evolutionary "black hole" is only one giant solar flare away.

With only minimal discourse with Patti, I recognize that she might be more intelligent than I and far more literate and grammatical. So I expect a comeback to this.  I invite all other comments as well as long as you understand that I may post the gist of the posting and will respond. I will ALWAYS give your answers to my response.  Until then, this is what you get, until I figure out a way to get a RSS account. Dreamweaver is ordered. I will add a link to this article. (MORE:On this Topic) and slip into a new page.