VICTORIA AND THE KILLING OF GARRY OAKS

The Pacific Northwest shook today as an earthquake struck off the coast of Vancouver Island. "Captive killer whale was found dead yesterday in his pool at the Vancouver Aquarium."  So read two of today's printed headlines! No mention was made of the killing of four trees in Victoria B.C. -- the "City of Gardens." There was however media coverage -- it was by CHEK T.V. news reporter Jason Pires.

"This stubborn Garry oak known as "tree number 19" was the last to fall. It was the largest on the site with a stem diameter of more than one meter." It may have been a four hundred year old tree, a tree that existed before Columbus discovered the America's -- it was a tree to be deleted for a parking lot. The good news is; some of the wood will be used to build new park benches for the hospital.

The Garry Oak is also called the Oregon oak and in superb sittings can attain a height of 100 ft. and has a winter silhouette rivaled only by the cottonwood. It is also an incredibly long lived tree and its range extends from B.C. south to the mountains of coastal Santa Cruz. There is also a much smaller sub-species (near shrub oak) that exists in the northern Mts. of CA.

More common in Oregon, there are few places in Washington State and British Columbia where Garry Oaks thrive. In Canada, they grow NOWHERE else but on southern Vancouver Island, the Gulf Islands and two isolated groves in the lower Frazer Valley. In British Columbia only 150 years of agricultural practices and urban sprawl have reduced the Garry Oak ecosystem to less than 5% of their original habitat. With our mounting subdivision's (like Victoria's), existing and inter-connective meadows of the Garry Oak no longer exist. We have islands of these trees, but that is all. And properties that own these trees have certain 'maintenance' problems. Worse news regarding 'Native Oaks' comes from California ... read links below.

As these meadows are further reduced, so do we also lose habitat for plants, birds and other creatures that enhance OUR lives; but may not be there for our children.

Garry Oak meadows house a huge amount of other native plants and animals, it has been estimated that over a thousand species are related to Garry oak meadows. With their ever- shrinking habitat, it is no wonder that one fifth of BC's rare plant species are also related to the Garry Oak. A link to a few of the other inhabitants of the Garry Oak Meadow.

Be it from the overgrazing by cattle or the introduction of non-native plant species such as Scotch broom, orchard grass or other, it is near impossible to find an uncorrupted meadow. In cities the loss is even faster. Garry Oaks like the Big Leaf Maple are prone to developing dead limbs. These may fall and create damage to the house built beneath. Their litter is messy and considering that the average homeowner invests himself in a property for only five years ... many of these trees find themselves needing to be "removed".

All of the Olympic Peninsula communities recognize this problem. This Oak is protected in Port Townsend, Sequim as well as in Port Angeles. They are not in Victoria! If ever a tree species deserves a Heritage designation it should be the Garry Oak, and tree cutting laws need to be instituted to protect them! . 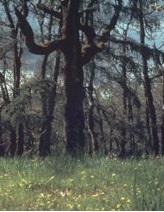 "The Pacific Northwest shook today as an earthquake struck off the coast of Vancouver Island." Perhaps it was the earth itself giving a Welcome to Victoria; or an Earth Day message to the "City of Gardens" ! My own belongs to a friend and perhaps expresses all to well what we are doing to this planet.

To plant a tree is an act of faith in the earth. An act of hope for the future. An act of humanity towards  coming generations Who will enjoy its fruits after we shall be gone.L. Mercier (1740-1814)

To plant a tree is also an act of faith FOR the future!'

Garry Oak seedlings can be purchased at many Nurseries that specialize in native plants. I used to grow them. They are very easy. Two B.C. Nursery's are Mosswood Perennials in Victoria and Fraser's Thimble Farms on Saltspring Island are suppliers of these trees. I too will start growing them again, or can provide seeds.  Contact me

Be it on Vancouver Island, WA State or in California, mankind remains the greatest enemy to these trees. If men can be held back in their destructive march to specie annihilation, these oaks will continue to hold their own against nature, droughts and caterpillars. We target the man driving the bulldozer, or wielding the chainsaw, but just as dangerous is the homeowner putting down the asphalt or over fertilizing the lawn that is now planted around it.

And while I'm in a bad neighbor frame of mind. Welcome to Victoria -- the intimate and sophisticated city, the capitol of B.C. and the premier tourist spot in the Northwest! She is also a dirty old lady that has for decades continued to flush her raw sewage into the Strait of Juan de Fuca. No amount of bluster, or threats of tourist boycotts have moved the Victorian's to clean up their act. For years provincial studies have been made and proof's given that emptying their toilet into the ocean less than twenty miles away, shouldn't worry me. Heck, a sewage-loving worm has actually increased its population density. Picture of a fish eagerly eying it as a meal.As Tom Leherer once sang in "Pollution -- It's in the water..." Victorians continue to insist that the Strait's fast flowing currents flush it out. If the population of crabs and mollusks have been reduced ... rest assured the survivors are surviving on "----".So the next time you dine in Victoria just remember that viruses cannot be killed just be exposing them to cold water. Pathogens such as Cholera, gut bacteria and polio viruses can survive at great ocean depths -- all within the diving range of whales, elephant seals, as well as bottom eating fish. I hope that on Earth Day you remember to order some flounder!

I was once told never to go to bed angry. I suppose what I wish to communicate most importantly, is that life (like gardening) is made of the sharing of experiences, of wondrous adventures and successes, balanced by mistakes and losses. It is also a fighting commitment to one's life, to one's home and to one's community: to cherish, nurture and appreciate what we are blessed with on a daily basis.As I grow older I am ever more convinced, it is not that we should be concerned about the world we leave to our children, but how to treat the world they have left to us! Best Wishes,